anaphase
The stage of mitosis or meiosis in which the chromosomes move from the equatorial plate toward the poles of the cell. In mitosis a full set of daughter chromosomes (46 in humans) moves toward each pole. In the first division of meiosis one member of each homologous pair (23 in humans), consisting of two chromatids united at the centromere, moves toward each pole. In the second division of meiosis the centromere divides, and the two chromatids separate with one moving to each pole. [G. ana, up, + phasis, appearance]

ana·phase 'an-ə-.fāz n the stage of mitosis and meiosis in which the chromosomes move toward the poles of the spindle
ana·pha·sic .an-ə-'fā-zik adj

ana·phase (anґə-fāz) [ana- + phase] the stage of cell division following metaphase, in which the kinetochores separate and the chromatids lined up on the spindle move to the poles (anaphase A), followed by lengthening of the spindle microtubules with consequent elongation of the cell and further separation of the poles (anaphase B). In mitosis, all pairs of chromatids are separated, resulting in a diploid number of chromosomes. In meiosis I, the chiasmata release and one of each pair of homologous chromosomes (each consisting of a pair of chromatids) moves to each pole, resulting in a haploid number of chromosomes; in meiosis II, the sister chromatids separate and move to opposite poles. 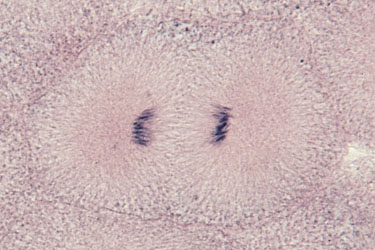