Ghon focus
the primary parenchymal lesion of primary pulmonary tuberculosis; when associated with a corresponding lymph node focus, it is known as the primary or Ghon complex. Called also Ghon primary lesion and Ghon tubercle. 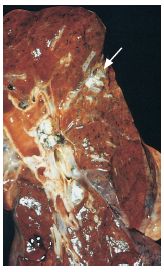