superficial spreading melanoma
the most common type of malignant melanoma, characterized by a period of radial growth atypical of melanocytes in the epidermis, usually with a lymphocytic cellular host response that may be accompanied by partial or complete regression of the radial growth phase; deeply invasive growth (vertical growth) is superimposed on the radial phase. It occurs most often on the lower leg or back, usually presenting as a small pigmented macule to a slightly palpable flat lesion that assumes an irregular outline on enlargement. 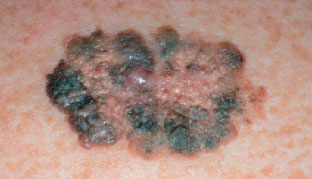