inversion
1. A turning inward, upside down, or in any direction contrary to the existing one. 2. Conversion of a disaccharide or polysaccharide by hydrolysis into a monosaccharide; specifically, the hydrolysis of sucrose to d-glucose and d-fructose; so called because of the change in optical rotation. 3. Alteration of a DNA molecule made by removing a fragment, reversing its orientation, and putting it back into place. 4. Heat-induced transition of silica, in which the quartz tridymite or cristobalite changes its physical properties as to thermal expansion. 5. Conversion of a chiral center into its mirror image. [L. inverto, pp. -versus, to turn upside down, to turn about]
- i. of chromosomes a chromosome aberration resulting from a double break in a segment of the chromosome, with end for end rotation of the fragment between the fracture lines, and refusion of the fragments; this results in reversal of the order of genes in that segment.
- paracentric i. i. in a chromosome of a single segment in which the centromere is not included.
- pericentric i. i. in a chromosome of a single segment that includes the centromere.
- i. of the uterus a turning of the uterus inside out, usually following childbirth.
- visceral i. SYN: situs inversus viscerum.

in·ver·sion in-'vər-zhən, -shən n
1) a reversal of position, order, form, or relationship: as
a) a dislocation of a bodily structure in which it is turned partially or wholly inside out <\inversion of the uterus>
b) the condition (as of the foot) of being turned or rotated inward compare EVERSION (2)
c) RETROFLEXION
d) a breaking off of a chromosome section and its subsequent reattachment in inverted position also a chromosomal section that has undergone this process
2 a) the conversion of dextrorotatory sucrose into a levorotatory mixture of glucose and fructose
b) a change from one stereochemical figuration at a chiral center in a usu. organic molecule to the opposite configuration that is brought about by a reaction in which a substitution of one group is made for a different group
3) HOMOSEXUALITY

n.
1. the turning inwards or inside-out of a part or organ: commonly applied to the state of the uterus after childbirth when its upper part is pulled through the cervical canal.
2. a chromosome mutation in which a block of genes within a chromosome are in reverse order, due to that section of the chromosome becoming inverted. The centromere may be included in the inverted segment (pericentric inversion) or not (paracentric inversion).

in·ver·sion (in-vurґzhən) [L. inversio; in into +vertere to turn] 1. a turning inward, inside out, upside down, or other reversal of the normal relation of a part. 2. in genetics, a chromosomal aberration caused by the inverted reunion of a chromosome segment after breakage of a chromosome at two points, resulting in a change in sequence of genes or nucleotides; e.g., the sequence abcdefg may be inverted to abfedcg. See illustration at aberration. 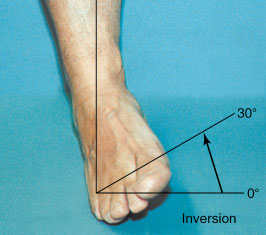 Inversion and eversion of the foot.