lung
One of a pair of viscera occupying the pulmonary cavities of the thorax, the organs of respiration in which aeration of the blood takes place. In humans, the right l. is slightly larger than the left and is divided into three lobes (an upper, a middle, and a lower or basal), while the left has but two lobes (an upper and a lower or basal). Each l. is irregularly conical in shape, presenting a blunt upper extremity (the apex), a concave base following the curve of the diaphragm, an outer convex surface (costal surface), a generally concave inner or medial surface (mediastinal surface), a thin and sharp anterior border, and a rounded posterior border. SYN: pulmo [TA]. [A.S. lungen]
- air-conditioner l. an extrinsic allergic alveolitis caused by forced air contaminated by thermophilic actinomycetes and other organisms.
- bird-breeder's l., bird-fancier's l. extrinsic allergic alveolitis caused by inhalation of particulate avian emanations; sometimes specified by avian species, e.g., pigeon-breeder's l., budgerigar-breeder's l.. SYN: bird-breeder's disease.
- black l. a form of pneumoconiosis, common in coal miners, characterized by deposits of carbon particles in the l.. SYN: miner's l. (2).
- brown l. obstructive airway disease with asthma produced by exposure to cotton dust, flax, or hemp. SEE ALSO: byssinosis.
- butterfly l. hemorrhagic markings appearing on an animal's l. after inoculation with Leptospira interrogans (L. icterohaemorrhagiae).
- cardiac l. disturbance in pulmonary anatomy and physiology secondary to valvular disease of the heart or to other disturbances of circulation incident to cardiac disease.
- cheese worker's l. extrinsic allergic alveolitis caused by inhalation of spores of Penicillium casei from moldy cheese.
- collier l. SYN: anthracosis.
- cystic l. SYN: honeycomb l..
- endstage l. severe diffuse interstitial fibrosis and honeycombing.
- farmer's l. a hypersensitivity pneumonitis characterized by fever and dyspnea, caused by inhalation of organic dust from moldy hay containing spores of thermophilic actinomycetes such as Micromonospora vulgaris, M. faeni, and Thermopolyspora polyspora, which thrive in the elevated temperatures of hay lofts and silos; repeated exposure may result in alveolar sensitization and, ultimately, granulomatous l. disease with severe disability. SYN: thresher's l..
- fibroid l. chronic interstitial pneumonia in a l..
- honeycomb l. the radiologic and gross appearance of the lungs resulting from interstitial fibrosis and cystic dilation of bronchioles and distal air spaces; of unknown cause or a sequel of any of several diseases, including eosinophilic granuloma, sarcoidosis, and any interstitial l. disease. SYN: cystic l..
- hyperlucent l. the radiographic finding that a l. or portion thereof is less dense than normal, as from air trapping by a bronchial foreign body, asymmetric emphysema, or decreasing blood flow. See unilateral hyperlucent l..
- iron l. SYN: Drinker respirator.
- malt-worker's l. extrinsic allergic alveolitis caused by inhalation of spores of Aspergillus clavatus and A. fumigatus from contaminated barley during the manufacture of beer.
- mason's l. silicosis occurring in stone masons.
- miner's l. 1. SYN: anthracosis. 2. SYN: black l..
- mushroom-worker's l. extrinsic allergic alveolitis caused by inhalation of spores of the mold Thermopolyspora polyspora or Micromonospora vulgaris from contaminated mushrooms under cultivation.
- postperfusion l. a condition in which abnormal pulmonary function develops in patients who have undergone cardiac surgery involving the use of an extracorporeal circulation; now rare due to advances in perfusion technique and equipment.
- pump l. SYN: shock l..
- quiet l. the collapse of a l. during thoracic operations undertaken to facilitate surgical procedure through absence of l. movement.
- shock l. in shock, the development of edema, impaired perfusion, and reduction in alveolar space so that the alveoli collapse. SYN: pump l., wet l. (1), white l..
- silo-filler's l. pulmonary edema, usually delayed for 1–4 hours, occurring in an individual exposed to silage, probably due to nitrogen dioxide; can progress to bronchiolitis obliterans.
- thresher's l. SYN: farmer's l..
- unilateral hyperlucent l. chronic bronchiolitis obliterans predominating on one side. See unilateral lobar emphysema. SEE ALSO: Swyer-James syndrome (2).
- uremic l. perihilar edema of the l. associated with renal failure and hypertension; the peripheral parts of the l. remain clear. SYN: uremic pneumonia (1), uremic pneumonitis.
- vanishing l. vanishing l. syndrome.
- welder's l. relatively benign form of pneumoconiosis, associated with welding, resulting from deposit of fine metallic particles in the l..
- wet l., white l. 1. SYN: shock l.. 2. SYN: adult respiratory distress syndrome.

lung 'ləŋ n
1 a) one of the usu. two compound saccular organs that constitute the basic respiratory organ of air-breathing vertebrates, that normally occupy the entire lateral parts of the thorax and consist essentially of an inverted tree of intricately branched bronchioles communicating with thin-walled terminal alveoli swathed in a network of delicate capillaries where the actual gaseous exchange of respiration takes place, and that in humans are somewhat flattened with a broad base resting against the diaphragm and have the right lung divided into three lobes and the left into two lobes
b) any of various respiratory organs of invertebrates
2) a mechanical device for regularly introducing fresh air into and withdrawing stale air from the lungs: RESPIRATOR see IRON LUNG
lunged adj

n.
one of the pair of organs of respiration, situated in the chest cavity on either side of the heart and enclosed by a serous membrane (see pleura). The lungs are fibrous elastic sacs that are expanded and compressed by movements of the rib cage and diaphragm during breathing. They communicate with the atmosphere through the trachea, which opens into the pharynx. The trachea divides into two bronchi (see bronchus), which enter the lungs and branch into bronchiole. These divide further and terminate in minute air sacs (see alveolus), the sites of gaseous exchange. Atmospheric oxygen is absorbed and carbon dioxide from the blood of the pulmonary capillaries is released into the lungs; in each case down a concentration gradient (see pulmonary circulation). The total capacity of the lungs in an adult male is about 5.5 litres, but during normal breathing only about 500 ml of air is exchanged (see also residual volume). Other functions of the lung include water evaporation: an important factor in the fluid balance and heat regulation of the body.

(lung) [L. pulmo; Gr. pneumōn or pleumōn] either of the pair of organs of respiration, one on the right and one on the left of the thorax (pulmo dexter [TA] and pulmo sinister [TA]), which are separated from each other by the heart and mediastinal structures. The right lung is composed of upper, middle, and lower lobes, and the left, of upper and lower lobes (see under lobus). Pulmonary disorders may be confined to, or localized in, one or more of the segments of the lobes. Each lung consists of an external serous coat (the visceral layer of the pleura), subserous areolar tissue, and lung parenchyma. The latter is made up of lobules, which are bound together by connective tissue. A primary lobule or terminal respiratory unit consists of a terminal bronchiole, respiratory bronchioles, and alveolar ducts, which communicate with many alveoli, each alveolus being surrounded by a network of capillary blood vessels. It is between the alveoli and capillaries that gas exchange takes place. See Plates 25 and 43. 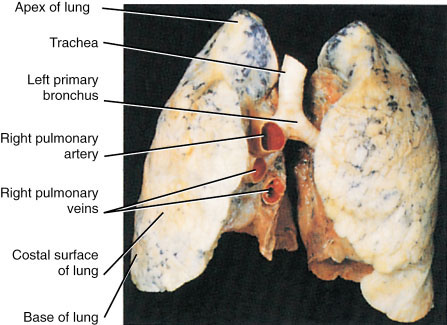 Lungs, bronchi, and trachea, which have been separated for clarity. 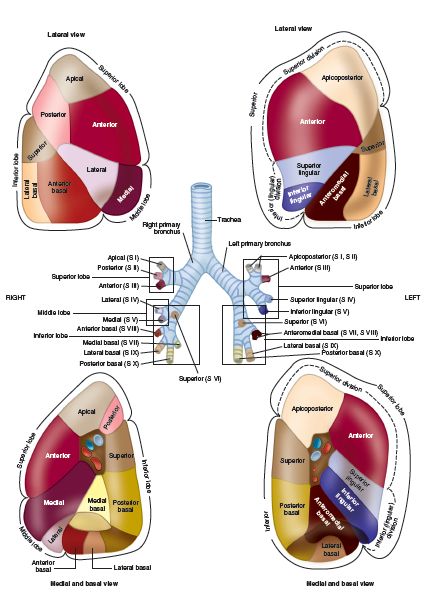