kid·ney 'kid-nē n, pl kidneys
1) one of a pair of vertebrate organs situated in the body cavity near the spinal column that excrete waste products of metabolism, in humans are bean-shaped organs about 41/2 inches (111/2 centimeters) long lying behind the peritoneum in a mass of fatty tissue, and consist chiefly of nephrons by which urine is secreted, collected, and discharged into the pelvis of the kidney whence it is conveyed by the ureter to the bladder compare MESONEPHROS, METANEPHROS, PRONEPHROS
2) any of various excretory organs of invertebrate animals

n.
either of the pair of organs responsible for the excretion of nitrogenous wastes, principally urea, from the blood. The kidneys are situated at the back of the abdomen, below the diaphragm, one on each side of the spine; they are supplied with blood by the renal arteries. Each kidney is enclosed in a fibrous capsule and is composed of an outer cortex and an inner medulla. The active units of the kidney are the nephron, within the cortex and medulla, which filter the blood under pressure and then reabsorb water and selected substances back into the blood. The urine thus formed is conducted from the nephrons via the renal tubules into the renal pelvis and from here to the ureter, which leads to the bladder. See also haemodialysis, horseshoe kidney, renal function tests.

kid·ney (kidґne) [Middle English kidenei] either of the two organs in the lumbar region that filter the blood, excreting the end-products of body metabolism in the form of urine, and regulating the concentrations of hydrogen, sodium, potassium, phosphate, and other ions in the extracellular fluid. Called also ren [TA]. Each human kidney is about 11 cm long, 5â€“7.5 cm wide, and 2.5 cm thick, and weighs from 120 to 160 g. The kidney is of characteristic shape, with a notch known as the hilum on its inner, concave border; renal vessels and nerves and the ureter pass through it, and it communicates with the cavity or sinus of the kidney. The kidney consists of a cortex (see renal cortex, under cortex) and a medulla (see renal medulla, under medulla). The medullary substance forms pyramids, whose bases are in the cortex and whose apices, the renal papillae, project into the calices of the kidney. The renal pyramids number from 10 to 15. The parenchyma of each kidney is composed of about one million renal tubules (nephrons, the functional unit of the kidney), held together by a little connective tissue. Each tubule begins blindly in a renal corpuscle, consisting of a glomerulus and the surrounding glomerular capsule, situated within the cortex. After a neck or constriction below the capsule, it becomes the proximal convoluted tubule, then Henle loop, then the distal convoluted tubule, the connecting tubule, and finally the straight collecting tubule, which opens at the apex of a renal papilla. The straight collecting tubules converge as they descend, forming groups in the center, known as medullary rays. See also Plate 20. 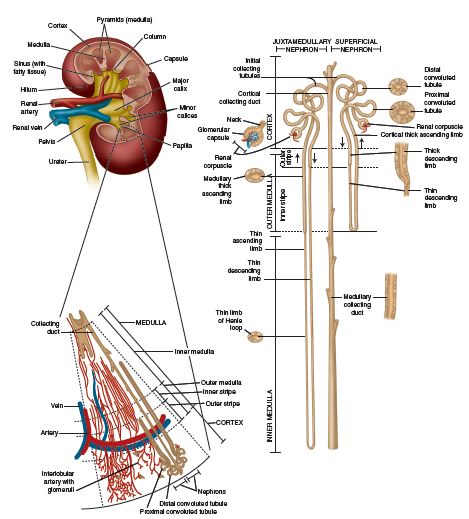 PLATE 20 STRUCTURE OF THE KIDNEY