Lymph
: An almost colorless fluid that travels through vessels called lymphatics in the lymphatic system and carries cells that help fight infection and disease.
* * *
A clear, transparent, sometimes faintly yellow and slightly opalescent fluid that is collected from the tissues throughout the body, flows in the lymphatic vessels (through the l. nodes), and is eventually added to the venous blood circulation. L. consists of a clear liquid portion, varying numbers of white blood cells (chiefly lymphocytes), and a few red blood cells. SYN: lympha [TA]. [L. lympha, clear spring water]
- aplastic l. l. containing a relatively large number of leukocytes, but comparatively little fibrinogen; such l. does not form a good clot and manifests only a slight tendency to become organized. SYN: corpuscular l..
- blood l. l. exuded from the blood vessel s and not derived from the fluid in the tissue spaces.
- corpuscular l. SYN: aplastic l..
- croupous l. a form of inflammatory l. with an unusually large content of fibrinogen; as a result of the fibrin that is formed in relatively dense mats, a pseudomembrane is likely to be produced.
- dental l. SYN: dentinal fluid.
- euplastic l. l. that contains relatively few leukocytes, but a comparatively high concentration of fibrinogen; such l. clots fairly well and tends to become organized with fibrous tissue.
- fibrinous l. a euplastic or croupous l..
- inflammatory l. a faintly yellow, usually coagulable fluid ( i.e., euplastic l.) that collects on the surface of an acutely inflamed membrane or cutaneous wound.
- intercellular l. the fluid in the potential spaces between cells in the various organs and tissues.
- intravascular l. l. within the lymphatic vessels, in contrast to intercellular l. and l. that has exuded from the vessels.
- plastic l. inflammatory l. that has a tendency to become organized.
- tissue l. true l., i.e., l. derived chiefly from fluid in tissue spaces (in contrast to blood l.).
- vaccine l., vaccinia l. that collected from the vesicles of vaccinia infection, and used for active immunization against smallpox.
* * *
lymphocyte, lymphocytic

lymph 'lim(p)f n a usu. clear coagulable fluid that passes from intercellular spaces of body tissue into the lymphatic vessels, is discharged into the blood by way of the thoracic duct and right lymphatic duct, and resembles blood plasma in containing white blood cells and esp. lymphocytes but normally few red blood cells and no platelets see CHYLE compare CEREBROSPINAL FLUID

n.
the fluid present within the vessels of the lymphatic system. It consists of the fluid that bathes the tissues, which is derived from the blood and is drained by the lymphatic vessels. Lymph passes through a series of filters (lymph node) and is ultimately returned to the bloodstream via the thoracic duct. It is similar in composition to plasma, but contains less protein and some cells, mainly lymphocyte.

(limf) [L. lympha water] 1. a transparent, slightly yellow liquid of alkaline reaction, found in the lymphatic vessels and derived from the tissue fluids. It is occasionally of a light-rose color from the presence of red blood corpuscles, and is often opalescent from particles of fat. Under the microscope, lymph is seen to consist of a liquid portion and of cells, most of which are lymphocytes. Lymph is collected from all parts of the body and returned to the blood via the lymphatic system. Called also lympha [TA]. See Plate 26. 2. any clear, watery fluid resembling true lymph. 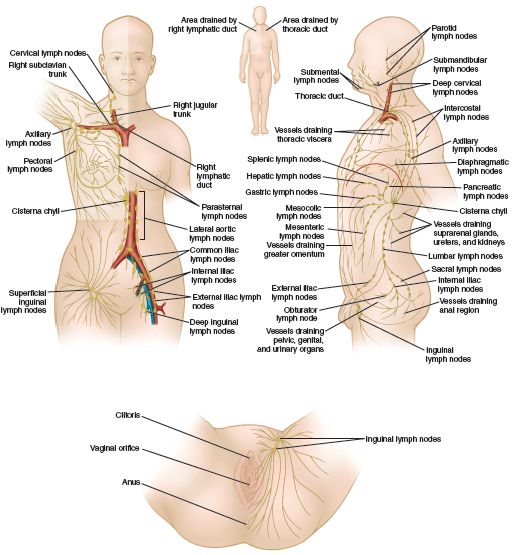