Mitosis
Ordinary division of a body cell to form two daughter cells each with the same chromosome complement as the parent cell.
* * *
The usual process of somatic reproduction of cells consisting of a sequence of modifications of the nucleus (prophase, prometaphase, metaphase, anaphase, telophase) that result in the formation of two daughter cells with exactly the same chromosome and nuclear DNA content as that of the original cell. SEE ALSO: cell cycle. SYN: indirect nuclear division, mitotic division. [G. mitos, thread]
- heterotype m. a variety of m. in which the halved chromosomes are united at their ends forming ringlike figures. Occurs in the first division of meiosis.
- multipolar m. a pathologic form in which the spindle has three or more poles, resulting in the formation of a corresponding number of nuclei.
- somatic m. the ordinary process of m. as it occurs in the somatic or body cells, characterized by the formation of the prescribed number of chromosomes, appropriate for the species (in humans the number is 46).

mi·to·sis mī-'tō-səs n, pl -to·ses -.sēz
1) a process that takes place in the nucleus of a dividing cell, involves typically a series of steps consisting of prophase, metaphase, anaphase, and telophase, and results in the formation of two new nuclei each having the same number of chromosomes as the parent nucleus compare MEIOSIS
2) cell division in which mitosis occurs
mi·tot·ic -'tät-ik adj
mi·tot·i·cal·ly -i-k(ə-)lē adv

n.
a type of cell division in which a single cell produces two genetically identical daughter cells. It is the way in which new body cells are produced for both growth and repair. Division of the nucleus (karyokinesis) takes place in four stages (see prophase, metaphase, anaphase, telophase) and is followed by division of the cytoplasm (cytokinesis) to form the two daughter cells. Compare meiosis.
• mitotic adj.

mi·to·sis (mi-toґsis) pl. mitoґses [mito- + -osis] a complex of processes by which two daughter nuclei receive identical complements of the number of chromosomes characteristic of the somatic cells of the species. It is the means by which the body grows and replaces cells and is divided into five phases: prophase, prometaphase, metaphase, anaphase, and telophase (qq.v.). NOTE: The term mitosis is used interchangeably with cell division, but strictly speaking it refers to nuclear division, whereas cytokinesis refers to division of the cytoplasm. Cf. meiosis. mitotic adj 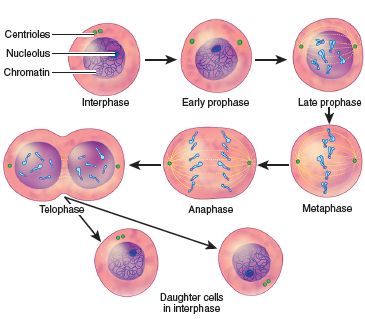