Polycystic kidney disease
Genetic disorder characterized by the development of innumerable cysts in the kidneys. These cysts are filled with fluid, and replace much of the mass of the kidneys. This reduces kidney function, leading to kidney

either of two unrelated heritable disorders marked by cysts scattered throughout both kidneys. Autosomal dominant polycystic kidney disease (ADPKD, formerly called the adult form) is the most common renal cystic condition, with deterioration of renal function that may not be detectable until the third or fourth decade of life; it runs a variable course, with only some cases progressing to renal failure. Autosomal recessive polycystic kidney disease (ARPKD, formerly called the infantile form) may be congenital or may appear at any time during childhood and has a high perinatal mortality rate; almost all cases lead to hypertension. In older children it may be associated with cystic and fibrotic disease of the liver. A similar acquired disease sometimes accompanies end-stage renal disease and is called acquired cystic disease of kidney. Called also polycystic kidneys and polycystic renal d. 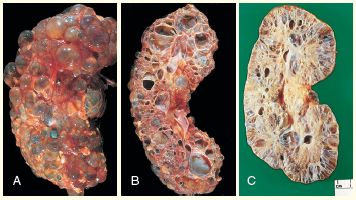