Accommodation
In medicine, the ability of the eye to change its focus from distant to near objects (and vice versa). This process is achieved by the lens changing its shape. Accommodation is the adjustment of the optics of the eye to keep an object in focus on the retina as its distance from the eye varies. It is the process of adjusting the focal length of a lens.
* * *
1. The act or state of adjustment or adaptation. 2. In sensorimotor theory, the alteration of schemata or cognitive expectations to conform with experience. [L. ac-commodo, pp. -atus, to adapt, fr. modus, a measure]
- amplitude of a. the difference in refractivity of the eye at rest and when fully accommodated.
- a. of eye the increase in thickness and convexity of the eye's lens in response to ciliary muscle contraction in order to focus the image of an external object on the retina.
- histologic a. change in shape of cells to meet altered physical conditions, as the flattening of cuboidal cells in cysts as a result of pressure. SYN: pseudometaplasia.
- negative a. the decrease of a. that occurs when shifting from near vision to distance vision.
- a. of nerve the property of a nerve by which it adjusts to a slowly increasing strength of stimulus, so that its threshold of excitation is greater than it would be were the stimulus strength to have risen more rapidly.
- positive a. increased refractivity of the eye that occurs when shifting from the distance to a near object.
- range of a. the distance between an object viewed with minimal refractivity of the eye and one viewed with maximal a..
- relative a. quantity of a. required for single binocular vision for any specified distance, or for any particular degree of convergence.

ac·com·mo·da·tion ə-.käm-ə-'dā-shən n an adaptation or adjustment esp. of a bodily part (as an organ): as
a) the automatic adjustment of the eye for seeing at different distances effected chiefly by changes in the convexity of the crystalline lens
b) the range over which such adjustment is possible

ac·com·mo·da·tion (ə-kom″ə-daґshən) [L. accommodare to adjust to] 1. adjustment, especially that of the position and shape of the lens of the eye for focusing at various distances (see illustration). Symbol A or a. 2. nerve a. 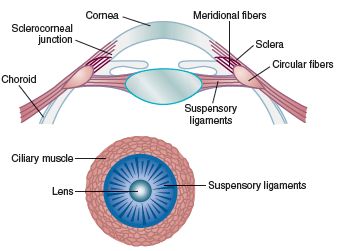 Structures involved in accommodation of the lens; tension on the suspensory ligaments works to keep the lens relatively flat whereas the meridional and circular fibers of the ciliary muscle counteract the pull of the ligaments and when contracted allow the lens to assume a more spherical shape.